The People’s Democratic Republic of Algeria is located in the North Africa on the shores of the Mediterranean Sea in the Maghreb region. Bordering six African countries Algeria is the largest country of its continent and the 10th largest in the world.

The vast majority of over 99% of Algerian population adhere to Sunni Islam following the rules of holy book of Islam, The Quran, that forbids all forms of gambling.

Taking into account that online gambling is illegal within the borders of Algeria and there are no online casinos based here, there are still a lot of offshore online gambling sites that accept players from Algeria.

Despite the fact that Algerians are denied the opportunity to gamble legally in their own country, they are still open to the properly regulated, legal online casinos that thrive to provide the trustworthy international operation. Bearing in mind that gambling in the foreign online casinos also officially falls under the restriction, players should be extremely vigilant and understand all the risks when playing at such online casinos. That is why it is especially important to choose online casinos that operate legally abroad and are licensed to accept players globally. And while some of them might be blocked, others are welcoming Algerian players.

Apart from the selection and variety of games, the things to look for would be the banking options that allow using eWallets and keep player’s money secure. While it is not advised to use payments that connect players to the Algerian bank accounts, one of the reasons being that these transactions could be blocked, there is a slight chance to find online casinos that accept Algerian dinar. Although most of the offshore online casinos don’t accept this currency, they are providing a lot of other options that are safer for the players. It is also good to know that there are no restrictions on the online payment methods in Algeria.

There are also a lot of online casinos that offer Arabic as one of their languages but as French is widely recognised in Algeria it gives risk loving individuals even more opportunities to enjoy those websites.

Last but not least is to keep in mind that although gambling is considered illegal in Algeria there have been no known cases of player prosecutions. 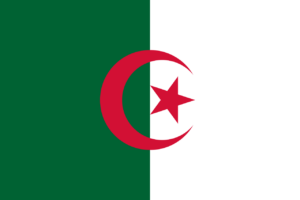 Algeria recognizes the Sharia law as the basis of the country’s legal system. Gambling is strictly prohibited by the Quran.

The Algerian Family Code is the law that was introduced in 1984 and calls all residents of Algeria to provide family members with the right to make decisions, govern movement and impose restrictions of their relatives.

Gambling as such is addressed in the Algeria’s penal code (Part VI, Articles 165 through 169). As well as covering fines and penalising those found guilty it also defines illegal behaviours. Both land based and online service providers are subjected to legal charges, however penal code does not address players.

Starting from 2010 Algeria imposed a strong censorship on the Internet. Primarily it had a political background, but as it is still in place in this republic, it might be used to monitor illegal activities including online gambling. Even though there are no certain laws on penalising or prosecuting online gamblers Algeria is concerned about the decency and morality of its population, that they believe is threatened by the international gaming providers, and are looking for a way to outlaw the use of VPN.

Algeria does not have any gambling regulation authority that would monitor, regulate, and license either local or foreign gaming industry. This being said it does not issue gambling licences or have any kind of licensing process and is not currently looking to change this.

There are no licensed Algerian gambling sites at this moment.

Algeria has been independent since 1962, but suffered through a decade-long civil war between 1991 and 2002. Nevertheless, it is a country that doesn’t have an open mind when it comes to gambling it does have a bit of a gambling history.

Colonial background has left its tracks on Algeria dating back to the 1909 when Algeria became the first African country to establish horse racing tracks. Horse racing is still considered as a legal betting activity and takes a big part in Algeria’s gambling history. You can find some hippodromes in Algeria nowadays and be a horse race spectator yourself, even though the industry suffered a big hit after betting on races organised abroad was prohibited in 1977. The most famous horse racetrack is the Hippodrome de Caroubier. Races are organized by Société des Courses Hippiques et du Pari Mutuel, and bets must be made live at the racetrack.

In 1937 Algeria legalised lotteries. Thus, it makes it one of the only legal forms of gambling in Algeria.      Although, this seems as immoral as betting and chancing in general, it has a layer of righteousness as profits from the national lottery provided by the operator that proved to meet all the needed religious and legal requirements Pari Sportif Algérien (PSA) have purely beneficial purposes and are going to those in need being distributed to support social welfare, charities and public services. PSA regulates the lottery market and enjoys its monopoly in this sector. Algerians can place bets in the specifically made for this purpose land-based lottery shops and purchase a scratch ticket for Lotto Mohtaref or Lotto Erriadhi which are the two main lottery games in the country. There are no authorized online platforms for the national lottery. All winnings earned by wagering are subjected to a tax of 40%. Each prize is taxed individually.

1984 was the year that set the beginning of the gambling ban. Algeria committed to live in accordance with the Sharia law, that forbids Muslims to gamble. Although Quran is not prohibiting some types of lottery it advises Muslims to stay away from all sorts of gambling and games of chance to avoid becoming addicted.

Moving to the last decade of the 20th century the new law wins the initiative enabling the internet service providers to block access to any websites that might affect the morality of the population, including online casinos.

Is gambling legal in Algeria?

As stated previously it is a strict no. All forms of gambling, including online gambling are illegal in Algeria. Although a lot of measures are taken to prevent betting loving residents from visiting foreign online casino websites there are no known cases of player prosecutions. It is still useful to keep in mind that there are numerous laws in Algeria with relatively loose definitions that could be used to justify penalising players. That is why risk taking is up to each individual.

Below you will find the latest reviews that out team has written about casinos that accept players from Algeria. Enjoy!

When I first got a glimpse of Betwinner Casino I thought that I had landed to the website of Bet365. It just looks so familiar

JVSpin is a freshly launched casino by a company called Orakum N.V. It has Curacao license and has managed to obtain the rights for the

24Monaco casino is a rather new online casino that is established in 2020. In this post let us see what this new kid on the

Melbet Casino belongs to Pelican Entertainment Ltd and was established already in the year 2012. Usually when a casino lasts that long one can safely