Australia, known as the Oldest Continent, is the country that forms its own continent. Officially it is called the Commonwealth of Australia. It is located in Oceania and is surrounded by the Indian and Pacific Ocean. Not only it is one of the largest countries in the world, it is also the largest country in Oceania. Perhaps that is one of the reasons accounting for Australia being a global leader in the gambling market.

Aussies, as they call themselves, love to gamble. Any game that involves bet placing excites them, be it land-based or online experience. The vast majority of this nation’s love to wagering also reflects in the gambling rate that is one of the highest in the world.
This, obviously, couldn’t pass unnoticed and there are a lot of sites out there offering custom-care gambling opportunities to Australian risk-takers.
Although Commonwealth country’s authorities established that it is illegal for domestic or international platforms to offer real-money casino-type games (including a popular game of poker) on their online websites to the Australian residents, even if they have a gambling license that permits them to do so, it is still legal for Aussies to access such websites. On the other hand, it is legal for Australian online casino providers to offer real-money games to the gamblers from abroad. 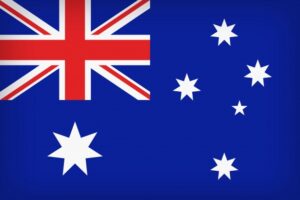 All activities that fall under the definition of “gambling” are regulated firstly on the federal level and secondly on the state and territory level in Australia.
The fundamental and the key law for the online gambling industry is called The Interactive Gambling Act. It defines the online interactive games as online poker, online casino games and live sports wagering, and requires both inland and foreign operators to not provide or advertise such betting options on their websites to Australian residents. Violation of this is classed as illegal operation. However, Australian based and licensed operators are allowed to offer their casino-style games and real-time sports betting options to the international players. Australians are not being limited in terms of online opportunities completely though and are allowed to bet on various sports or racing events in advance according to the Totalisator Agency Board (live option is only legally available over the phone or in the specifically designated and licensed facilities). Australian authorities don’t forbid their residents to access foreign gambling websites.
As it stands Australia has six states and two mainland territories (the Australian Capital territory and the Northern territory) that all are in charge of their own regulations and law enforcements. They do, however, acknowledge the Federal Government’s authority and are regulated in compliance with the Interactive Gambling Act and the Australian Communications and Media Authority.
In 2017 the Australian Communications and Media Authority was empowered to carry out more control over the gambling industry in Australia. With the stricter laws coming into place ACMA got the permission to liaise with other licensing jurisdictions in order to inform them about the illegal operators within the country.
Advertisement of any kind of interactive online games or such that attracts attention of Australian residents and invites them to play on the international websites by any kind of party is finable and punishable according to Australian laws.
Australia has some policies in place that protect the rights of people engaging in the interactive gambling activities.
Tax amounts are constantly changing in different jurisdictions and are dependant on the permit type. Players are not taxed in Australia, it only applies to the gambling service providers.

All gambling licenses are granted by the authorities of each individual state or territory who are after responsible to oversee whether their jurisdictions are operating according to the law. Supervisory tasks also fall under the responsibility of Australian Communications and Media Authority.
Each state and territory licensee follow a specific Casino Control Act.
Any kind of gambling activity, including manufacturing of the casino equipment or anything that is connected with selling gambling related products or services has to have a lawful foundation in a form of a specific license.
Any kind of establishment that wishes to provide their wagering services to Australians or foreigners must have a venue operator’s license and permit as well as the license to operate each gaming machine that they offer in their facilities.
It is illegal for international providers to offer their online wagering services unless they have a licence issued by an Australian state or territory.

As determined Australia is a risk-taking loving nation. Each year Australia generates a huge amount of revenue in gambling taxes, in fact it totals in billions of Australian dollars.
So why do they enjoy gambling so much and when did it all start?
The early betting activities were already noticed during the country’s colonial times. The first official horse racing in Australia dates back to the 1810. It took a bit longer to conduct the first ever Australian lottery as it happened in 1881. As it comes to Australian number 1 favourite gambling activity known as “pokies” it goes back to the 1956. “Pokies” basically are slot machines that offer exciting games of chance. Nowadays the technology moved further, and pokies have video displays that simulate physical reels. This Commonwealth country has more “pokies” than any other country out there.
When it comes to the first land-based casino in Australia it was opened in 1973 in the island state of Australia Tasmania and was called the Wrest Point.
Currently there are around 20 land-based casinos in Australia. However, it will not stay like that for long as there are billions being invested in amazing, top-scale projects that will have casinos, bars and restaurants, luxury hotel rooms and much more. One of them called Crown Sydney is already overlooking the city’s shoreline from the hight of 275 metres and is planning to offer its stunning views and entertainment in December 2020.
Lottery supporters in Australia will have to change their preferences as in 2019 it was decided to prohibit betting on the lottery as well as keno draw outcomes.

Is gambling legal in Australia?

It is legal to gamble in Australia, however there are some exceptions.
Australian government doesn’t forbid its residents from accessing international gambling websites.
It is, nevertheless, prohibited for any of these international gambling websites (as well as local) to offer or advertise so called “casino games” including online poker, online instant lotteries, live wagering on the sporting or racing events.
The legal gambling age in Australia is 18. This applies for land-based and online gambling.

Below you will find the latest reviews that out team has written about casinos that accept players from Australia. Enjoy!

JVSpin is a freshly launched casino by a company called Orakum N.V. It has Curacao license and has managed to obtain the rights for the

Pokie Place Casino is a new very good looking online casino that is oriented towards players from Australia, New Zealand and Canada. It does not

24Monaco casino is a rather new online casino that is established in 2020. In this post let us see what this new kid on the