Gambling Anime that You must see in 2020

Are you into anime about as much as a good game of poker or Texas Hold’em? In that case you’ve stumbled upon the right place. If you need a rest from playing too many Casino games perhaps it’s time to kick back, relax and check out a few gambling anime instead.

Even if you’re not familiar with gambling these shows may be worth your time. As the line from episode 49 of Gintama goes: “Life with no gambling is like a sushi without wasabi”.

Set in Hyakkaou Private Academy, Kakegurui follows the story of Yumeko Jabami who shows up as a transfer student at the school. The Academy houses the children of some of Japan’s most powerful people and they are all really into gambling. The arrival of Yumeko – the outsider – with her spectacular gambling skills throws the strict world of the Academy into chaos.

The anime is meant for adults and includes plenty of profanity, nudity and violence. It is a good mix of everything that we find fascinating about the shadier sides of gambling.

If you are looking for a Casino anime then you won’t be able to go wrong with this one.

Rio Rollins – who is also known as the Goddess of Victory –  is a dealer who works at Howard Resort Hotel. She has the effect of making everybody else around her very lucky with gambling and particularly with playing Slot machines. This series is full of very satisfying victories.

Ignore the fact that in reality such a dealer would cause absolute chaos at a real Casino. Despite the central premise of the show not making all that much sense it’s still a great, light-hearted and fun show that you should check out.

This anime revolves around a failing sports team who plays a simplified version of baseball called “One Outs” and the protagonist called Toua Tokuchi. Tokuchi is the pitcher in the team (called Lycaons) and he gets recruited by a batter called Hiromichi Kojima to save the team from its losing struggle.

As it turns out though things are not very simple. The team’s manager – Saikawa – isn’t really interested in winning at all and proposes a crazy deal.

Toua has to figure out how to oppose the other team and outsmart his manager at the same time. This is a show all about strategy, planning and psychological games.

Many anime fans will already be familiar with this and title and for good reason. It’s a very popular series mainly due to its amazing pacing, well developed characters and animation style.

The story is really clever as well. It follows Kaiji Ito, a down-and-out alcoholic who is facing some major difficulties in life. A loan-shark is after him and trying to get him to pay off his former co-worker’s debt of over 3000,000 yen. This is impossible for Kaiji.

At one point Kaiji is offered a chance to board a shady cruise ship and gamble his way to victory. The terms for him are simple, but there is a lot on the line: if he wins, he leaves the ship with 20,000,000 yen and if he loses he must do two years of forced labour.

The stakes are high. As such, the series is full of super intense scenes and psychological nuance.

This show focuses on Nangou who owes 3 million yen to the yakuza. He is living life on a knife’s edge.

It is at this point Nangou meets a kid called Akagi who turns the odds in his favour. Akagi is a novice at mahjong, but manages to save our main character’s life anyway. As it turns out the kid is very talented at gambling and a naturally skilled player of mahjong. You will witness many interesting life and death games.

This is an anime that treats itself with a degree of respect. There’s no romantic subplots, stale humor or over-the-top expressions.

It’s also not a problem at all if you don’t know how mahjong works: the show does a good job at explaining how the game works. Akagi will initiate you to the game and you can watch the anime with ease.

This is another show about mahjong, but it’s not very serious about the subject matter. It follows a girl called Saki who actually hates the game because she associated bad childhood memories with mahjong.

Everything changes the day she joins her school’s mahjong club at the request of her friend.

This show comes with a touch of kawaii and his playful, colorful and fun.

The reality of illegal gambling is harsh. This unforgiving and cruel reality is the subject of Usogui which is based on a manga of the same name. In this universe people tend to bet with their lives so an organization called Kagerou is created to impose order.

This original series follows a talented gambler named Baku who is known as Usogui or the Lie Eater. By applying his amazing skills he wants to take over Kagerou and take charge

This is a very short animation which is a shame because it is totally quality. If you would like to explore the universe further you should read the books by Toshio Sako.

World War 2 has ended. Japan is rebuilding itself from the ruins. The only way to earn a living is by gambling since the wages are laughably low.

A young man called Tetsuya survives by illegal gambling, but everything takes a wrong turn one day when a cheater leaves our protagonist penniless. He learns that his only option is to also learn how to cheat in order to keep going.

This is an anime about the game mahjong in particular. Those who are familiar with mahjong will appreciate how seriously the show takes the game. Legendary Gambler Tetsuya has a philosophical side to it and there is a lot to learn from the show.

Have you ever wondered what it would be like if great leaders like Putin, Kim Jong-il and George W. Bush were to gamble? Well, Mudazumo Naki Kaikaku is a show that can scratch that very precise itch.

The game of choice is – you guessed it – mahjong. However, there is a twist: as these political leaders duke it out, the losers have to do whatever the winners say.
This is a show full of crazy plot twists, tons of political humor and general over-the-top jokes.

You should be aware that the manga only scratches the surface

Imawa no Kuni no Alice

How to combine the worlds of RPG video gaming and gambling? By making Imawa No Kuni No Alice. The show follows a high-school student called Ryouhei who has really big dreams. One day him and his mates are transported to a place called Borderland. It is a magical place where luck determines everybody’s chance of making it out alive.

The gang is presented with fortune slips and all of them contain seemingly impossible math problems. A wrong answer means a sea of burning arrows which could kill all of them where they stand.

There is no anime on this list with higher stakes than Death Parade.

The show is set in a bar run by Decim. His visitors are those who have died. In his bar they play a game which is determined by a single spin of the roulette wheel.

The central question of the anime is this: does the game decide the outcome or the player’s morals?

No Game No Life 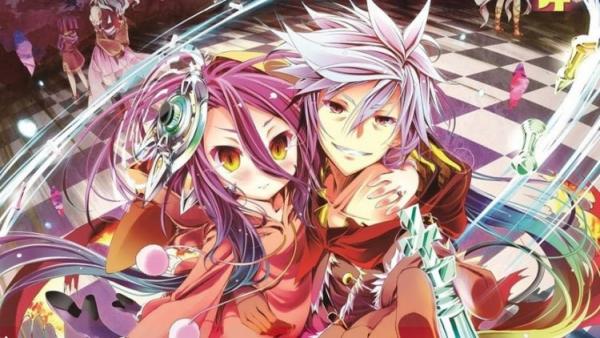 This isn’t your usual gambling anime, but some Casino games do make an appearance. We follow step-siblings Shiro and Sora who are outsiders in their community, but they are also highly skilled players.

The God of Games approaches them to invite the pair to his world. The place is called Disboard and there, all political struggle is solved by playing games.

You need to prepare for some seriously high-stake wagering and gambling tournaments if you plan on watching this show.

C: The Money of Soul and Possibility Control

Money is paramount to staying alive in this world. This anime is all about exploring this idea.

We find ourselves in the Financial District where desperate people play games of luck in hopes of winning it big. One central theme of the show is the idea of betting your future so as to be able to live a better present.

The plot is quite fascinating and will require you to use your brain a little bit more in order to be able to follow along.

This is another show that isn’t strictly about gambling, but it does include a lot of poker.

The story revolves around eight spies who have all been trained in the art of manipulation.

The setting of the show is World War 2 which means there is ample opportunity for creating a really bleak and gritty atmosphere.

Where to watch gambling anime?

One of the best sites to watch anime is crunchyroll. Of course there are many other sites out there but they should have all the series listed in this article and should cater all your needs.

This pretty much concludes my list of the best gambling anime out there. Have fun watching them and whenever you feel an urge to gamble yourself please keep in mind that you can find the best online casino to do that from our comprehensive list.